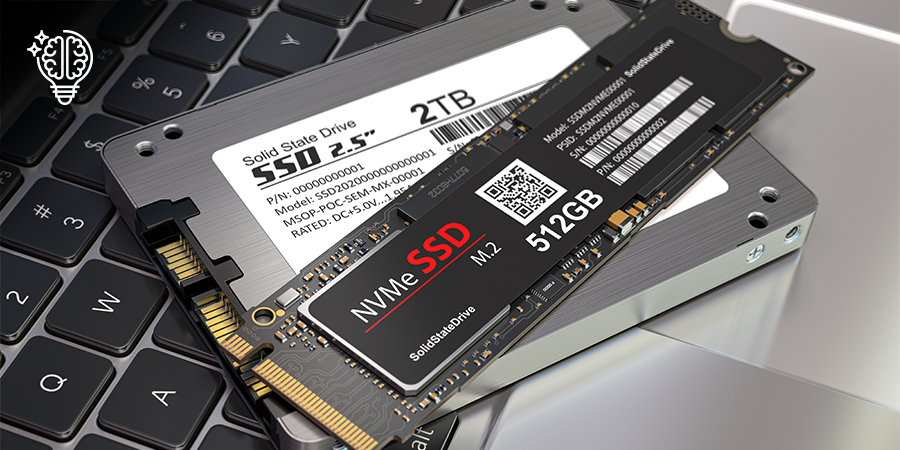 Get the lowdown on the latest storage options for you computer.

SSD/SATA
SSDs are common drives that are now standard issue for most computers, as is the case across Apple™'s line of Macs. Rather than using disks, motors, and read/write heads like hard disk drives (HDDs), SSDs use persistent flash memory to retain information. SSDs have become so common mainly because they hold an advantage over HDDs for performing at higher speeds and using less power.

A Serial AT Attachment (SATA) is now widely considered the storage standard for PCs. A SATA SSD is an SSD equipped with a SATA interface. SATA SSDs have the advantage of being faster than spinning disc HDDs, but their speed caps at 600 MB/s. Generally, SATA SSDs offer lower cost storage than M.2 or NVMe drives, so they tend to be a better option for anyone seeking a general purpose drive on a tighter budget.

One of the disadvantages of SATA drives is that they require two cables to function correctly, so they can clutter your setup and even affect airflow within a computer. However, not all SSD form factors use the same type of connection, so they differ in speed and the clutter around your setup.

M.2
M.2 is a new form factor for SSDs that plug directly into a computer's motherboard without the need for any extra cables. M.2 SSDs are significantly smaller than traditional, 2.5 inch SSDs, so they have become popular in gaming setups because they take up less space.

Non-Volatile Memory Express (NVMe) drives were introduced in 2013 to attach to the PCI Express (PCIe) slot on a motherboard instead of using SATA bandwidth.

NVMe drives can usually deliver a sustained read-write speed of 3.5 GB/s in contrast with SATA SSDs that limit at 600 MB/s. Since NVMe SSDs can reach higher speeds than SATA SSDs such as M.2 drives, it makes them ideal for gaming or high-resolution video editing.

Their high speeds come at a high cost, however: NVMe drives are some of the more expensive drives on the market.

Which SSD Is Best to Use?
There are a few factors to consider in choosing which drive is best for you. As you compare the different components of your build, consider your technical constraints, budget, capacity needs, and speed priority.

SATA drives usually range from 500GB to 16TB in storage capacity. Most M.2 drives top out at 2TB, although some may be available at 4TB and 8TB models at much higher prices.

SSDs and SATA drives tend to be more affordable options compared with NVMe drives. However, you should consider the performance upgrade that an NVMe drive can offer—if you plan to be making a lot of large file transfers or want to have the highest speeds for gaming, then a higher priced NVMe SSD is worth the investment.