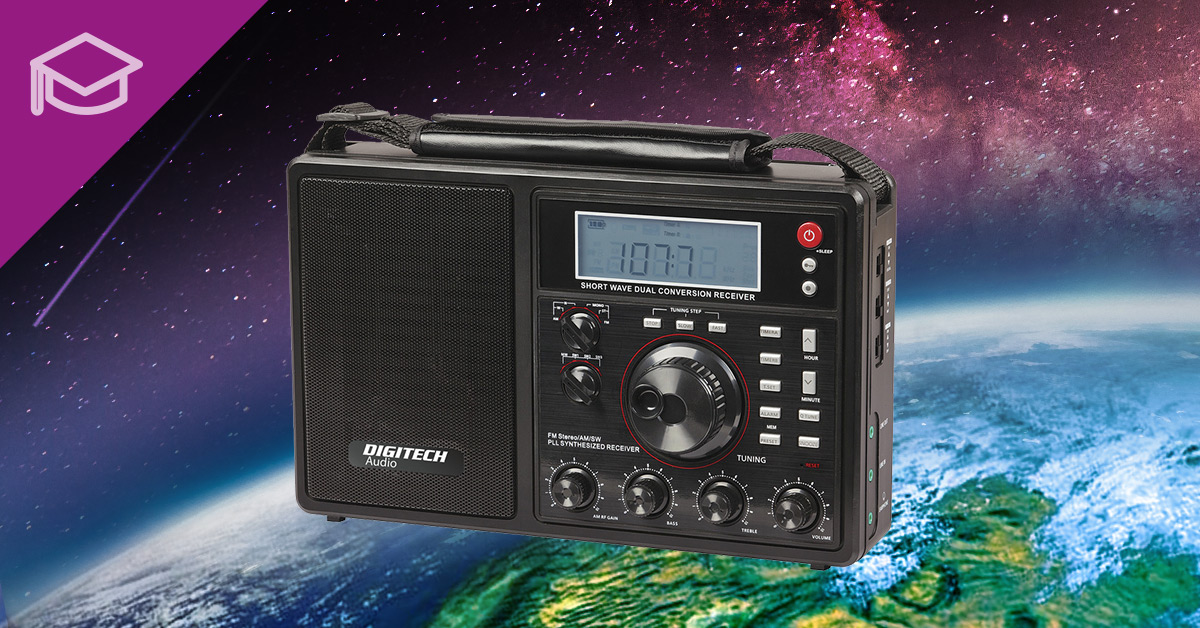 Listen in on transmissions from other countries with these powerful yet compact devices.

Internet radio might be an easy way to check out what’s happening on the air in other parts of the world, but picking up original SW (shortwave) transmissions from other countries on your own world band receiver is a unique and special thrill. Some units also let you listen in on air traffic and 27MHz CB (citizen band).

The 'ordinary radio' in your car or home entertainment system is only capable of receiving a narrow, limited band of frequencies, with relatively poor sensitivity and precision. By comparison, world band radios can tune in to a far wider spectrum.

How can radio travel so far?
Listening in on transmissions from well over the horizon is made possible by SW transmission, which is a band of frequencies in the 1.8-30Mhz range of the radio spectrum. These radio waves bounce off the ionosphere (a layer of ionised particles in the upper atmosphere), and as a result, can travel many thousands of kilometres.

What do all the initials stand for?
When comparing different world band radios, you will be confronted by a potentially baffling array of options represented by various letters. Here is what they all mean:

AIR band comprises the frequencies between about 118MHz and 137MHz, which are used by air traffic control to communicate with aircraft.
SSB stands for 'single sideband' modulation. SSB-equipped radios let you listen in on morse code, amateur SW transmissions and CB.
PLL means 'phase-locked loop', which is a type of circuit used in the tuning system to filter out noise and ensure greater signal stability.
MW is simply 'medium wave' transmission, more commonly known as AM.
LW or 'long wave' frequencies typically range from about 150-450kHz, and are typically used by navigational beacons rather than for transmitting broadcasts.

See below for more information about the features offered by world band radios.

What is world band radio?

Radio is a communication platform that has stood the test of time since its launch over 100 years ago. It provides us with a mix of audio entertainment and real-time information - music, stories, news, and talk-back.

Common AM/FM radio provides local and national radio broadcasts, but "world band" radio provides radio broadcasts from all around the world. World radios resemble normal AM/FM radios in appearance, but they're so much more! They're a relatively inexpensive way for expatriate listeners to catch up on news from their homeland. They're also great for bilingual and multilingual listeners who want to access communications in different languages. World band radios are also fun for armchair travellers, who want to be exposed to another culture from the comfort of their own homes. Tune into Athens' most popular radio station, serve some moussaka and souvlaki, and it's as if you're dining in Greece! Well, almost...

How does world band radio work?
Much like television antennas, the antennas of radio receivers 'catch' radio transmissions, which are then translated to an audio signal for the radio to broadcast. Commercial, community and national radio broadcasters transmit their station's signal via the FM (frequency modulation) or AM (amplitude modulation) networks. However, if your radio receiver 'catches' shortwave radio transmissions (known as SW or high frequency radio) it can be tuned into broadcasts from other countries. This is because SW transmission signals can travel much greater distances than AM or FM transmission signals.

Frequencies
Radio transmissions use different frequencies for ease of search and selection. By tuning your radio to a specific frequency, you pick up a different station. Some radios show frequency in megahertz (MHz) and others in kilohertz (kHz). Radios with broader frequency bands theoretically have access to more stations, making them more expensive than radios with limited frequency bands. Reference the frequency of the stations that you are hoping to access against the specifications of the world band radio you're considering, to ensure you can receive those stations.

Phased-Locked Loop (PLL)
Another feature to consider is PLL. It enables radio receivers to remain on a station frequency with greater accuracy, ensuring a more stable reception. It's not mandatory for overseas signal reception, but it definitely improves the strength of the signals the radio antenna picks up. Our best-selling World Band AM/FM/SW/LW/AIR PLL Radio (AR1733) also features longwave band to extend the reach of the radio's receiver, and air band. It only requires 2 x AA batteries, which makes it easy to carry around.

Air Band
You may have noticed we just mentioned "air band". As it sounds, these are the frequencies used by aircraft and aviation, so you can listen in on those too. Great for aviation enthusiasts! Typically between 118 and 137MHz, you'll hear traffic from commercial and regional airports and aircraft, depending on your proximity to them.

Power Delivery
The majority of world band radios run on batteries, although some - like our World Band AM/FM/SW PLL Radio (AR1748) - also offer a 9VDC power supply for when access to mains power is preferred. If you plan on using your radio regularly then a mains power/battery operated option such as this is a worthwhile investment. With the correct adaptor - such as our 4.8 Amp Cigarette Lighter charger (MP3667) - you could even run it in your car!

Added Features
Other features to consider include the number of channel presets your radio offers, which is important if you want to regularly tune into a range of stations. Some radios also include normal radio functions such as alarm and snooze, or more fine-grain tuning controls. Our synthesised receiver radio (AR1945) includes single-sideband modulation (SSB). This is used to obtain current weather reports so is useful for outdoor adventurers who find themselves in situations where an unexpected turn in the weather could prove dangerous.

If you're a keen radio listener and want to find out what's happening in other parts of the world, then using a world band radio can be a novel way to do so. Visit us in store or online to discover Jaycar's world band radio range. Our staff will make sure you leave with what you need (including batteries!).