Members Only - 15% off sitewide when you spend $50+
Simply sign in before checking out for discount to be applied. Exclusions apply, see T&Cs. Not a member? Sign up today.

Can be turned into a hovercraft, car, spider & more. Controlled by your Smartphone or Tablet. Code your own stunts & manoeuvres.

Unsubscribe from this in stock notification

You'll be notified as soon as this item is on special

Unsubscribe from this on special notification

BUILD IT. CODE IT. FLY IT

A 7-piece modular drone that can be turned into a hovercraft, car, spider and more! It is made of light but durable plastic foam so you can bump into walls without making dents. Control it from your Smartphone or iPad via Bluetooth using a freely available iOS or Android app. Control and program your aerial stunts through the Makeblock App. Simply drag-and-drop different blocks of commands - like forward, pause, turn, and forward - and connect them together to create a seamless action. Ages 8+.
CREATE FROM YOUR IMAGINATION

With magnetic attachments and modularity, the Airblock drone is only limited by your imagination. Perfect for STEM.
TRANSFORMS LIKE MAGIC

Airblock is made of magnetic, modular parts that are easy to assemble and disassemble without the need for tools. Airblock has two main modes: hexacopter drone and hovercraft, but with its modularity, you can create even more modes!

CODE IT
Programming is the language of the future, and many are starting to learn at a young age because it also helps to develop logical thinking and problem-solving. Imagine a cool stunt and have it become a reality with the problem-solving. It’s simple to use. Simply drag-and-drop different blocks of commands -- like forward, pause, turn, and forward--and connect them together to create a seamless action.
AIR WAR

TAKE OVER LAND, SKY AND WATER 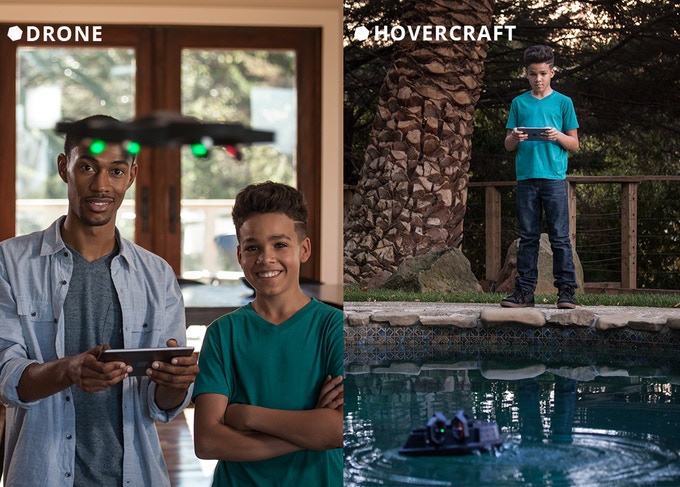 Airblock is fun whether you're just flying it around the house or controlling it in a pool or on land! Fly over new terrain and explore new horizons for an amazingly exciting adventure!
CRASH FRIENDLY AND REBUILDABLE

Crash it and rebulid it! It's fun to watch it hit walls and crumble into building blocks. The soft and durable foam material makes it crash-friendly, but you don't have to worry about damaging walls or furniture.
CONTROL FROM YOUR SMART DEVICE
From the app, you can drag-and-drop blocks to create flight codes, then assign the code to a button. If you don’t feel like coding, you can just commandeer Airblock using the joystick controls.
AERODYNAMICS BEHIND THE HOVERCRAFT

The lift from the four propellers allows Airblock to do a number of stunts, and by selecting two propellers from either side, it can generate specific movements. For instance, the two propellers located on the back of the hovercraft drive the hovercraft forward. The two propellers located in the front drive the hovercraft backward. Getting two propellers to push against each other enables the hovercraft to go left or right. With a little bit of knowledge in physics and aerodynamics, you can even make the hovercraft drift, slide or rotate in any direction!
WHAT'S IN THE BOX
• 1 x Control core
• 6 x Blade modules
• 6 x Spare blades
• 10 x Blade shields
• 1 x Hovercraft base
• 1 x Lithium rechargeable battery
• 1 x USB cable
• 1 x Charger
Specifications
• Control range: 10m
• Flight height: 5m
• Flight speed: 0-1 metres per second
• Battery: 700mAh, replaceable
• Flight time: About 6 minutes
• Communication: Bluetooth
• Sensor: Six-axis Gyroscope / Ultrasonic / Barometer
• Programming: Graphical programming
• Dimensions:
• Six-axis Aircraft: 235(Dia.) x 54(D)mm
• Hovercraft: 335(L) x 208(H) x 126(D)mm
• Recommended for ages: 8+
Have fun but know the drone rules – go to droneflyer.com.au

STEM
Thanks for your Query. Will get back to you ASAP.
Related Products
DELIVERY