We found a little game project online at http://gamebuino.com, and with it being open-source, realised we could make our own version of it using duinotech parts. Even better, there's already a heap of games that have been created at https://github.com/Rodot/Gamebuino-Games-Compilation, and because it's based on Arduino, you can create your own games as well. There's a complete set of libraries for making your own games at https://github.com/Rodot/Gamebuino, too. And just to make sure you've got something to get started with, we've built a Tic-Tac-Toe game for it too.

There's a bit of soldering and fiddly wiring involved, but we were playing games on it within a few hours. 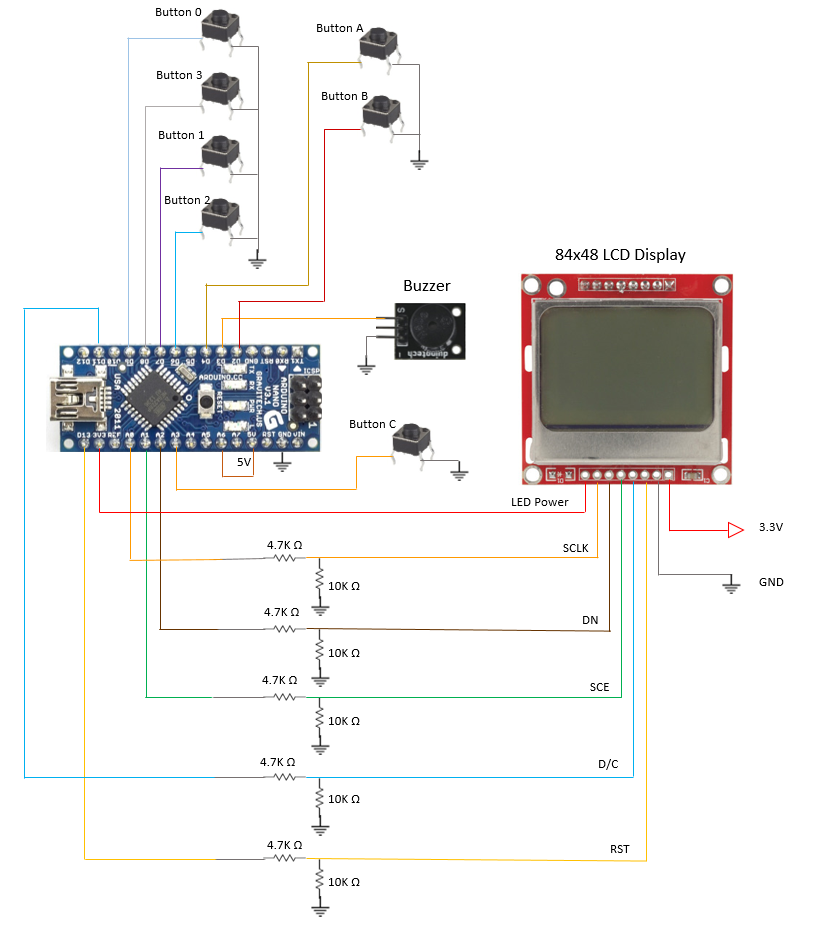 You'll notice that the Prototype Board has numbers and letters marked on the columns and rows- we need to line up the components with the coordinates given so that we can fit them all in. We'll fit all the components first, then join them together with wires later.

Insert the Pushbuttons as follows:

Buttons on the right should have their legs running along the numbered rows (up and down).

After the buttons and resistors are installed, the board should look like this: 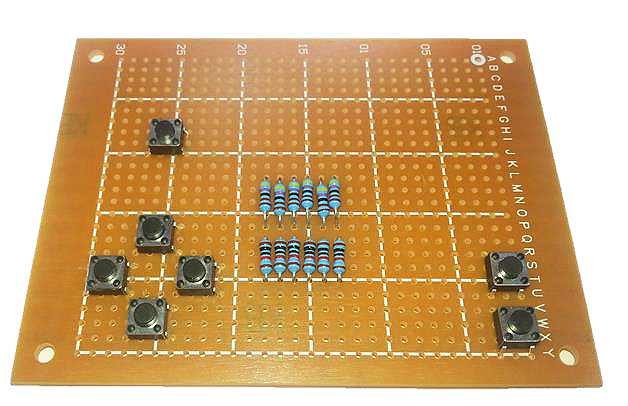 Note the leg positions of the switches 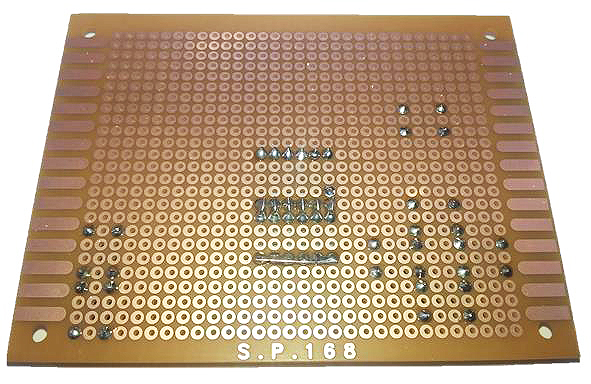 Note the joins along column T and between P and Q

Next, take the Header Strip, and break off a row of eight pins. Place this in Column I, rows 9-16, and then fit the LCD Screen into Column Y, rows 9-16. The header pins should go into the holes in the top of the LCD Screen. Solder these pieces down, leaving a small gap between the resistors and the LCD Screen so they don't touch.

Note that the top of the screen has a broad silver border. After this, you can trim the pins at the back of the LCD Screen so they aren't so long.

The next step is to fit the Nano onto the board. This goes into columns A and G, from row eight to row 22, with the USB connector facing above the side of the board with five buttons. The Nano can be pushed down firmly onto the board and soldered into place. 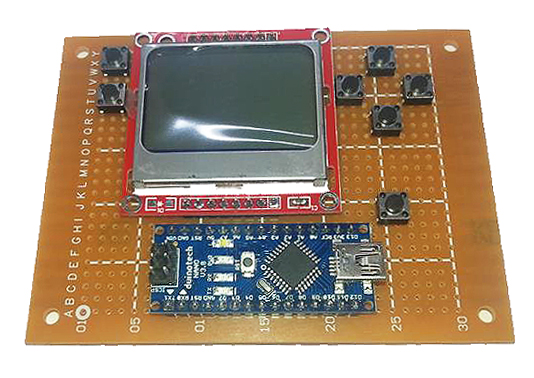 The final component on the front side of the board is the Buzzer. For this, we remove the Buzzer unit from the module, so that we can make our final board as compact as possible. The can be done by applying heat from a soldering iron to each of the legs (you may need to go back and forth between the legs a few times) while slowly pushing the Buzzer off the board. Be careful that it doesn't fly off as the last of the solder gives way. The Buzzer unit can now be installed on the board- the positive pin goes to hole I1, and the negative pin to L1. You will probably need to pull the sticker off the Buzzer to see the markings, and usually, only the positive pin is marked. From the front, our Arduino Game Machine should look complete: 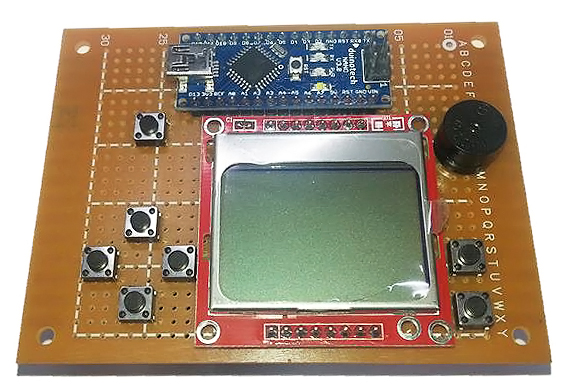 The wiring on the back is what makes it all work, so this has to be right. The LCD Screen runs off 3.3V power and logic levels, which is why we have the resistors on the board- they form a voltage divider, which turns 5V signals into 3.3V signals. In the table below, some of the connections are made directly, and some are made via the voltage divider.

While doing this, I've found it helpful to have this diagram of the underside of a Nano, with pins marked. It's how the Nano pins are laid out on the wiring side of the board:

We'll show how we did the wiring below. Firstly, make all the ground connections. We did this by running a wire from the Nano GND to the voltage divider T column, and then making all the other connections from there. 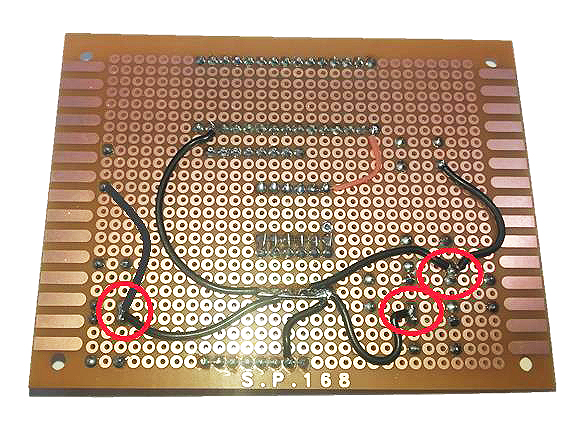 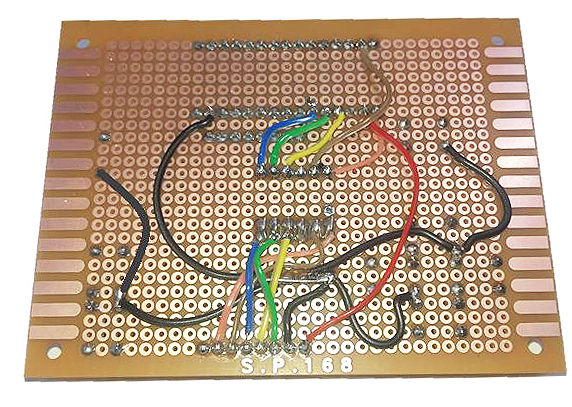 Then we can do the wiring for the buttons, speaker and battery monitor. Make sure that you use the same terminals on the Push Buttons as shown- some of the terminals are wires straight through and the Nano will think the buttons are pushed down permanently if they are wired wrong. 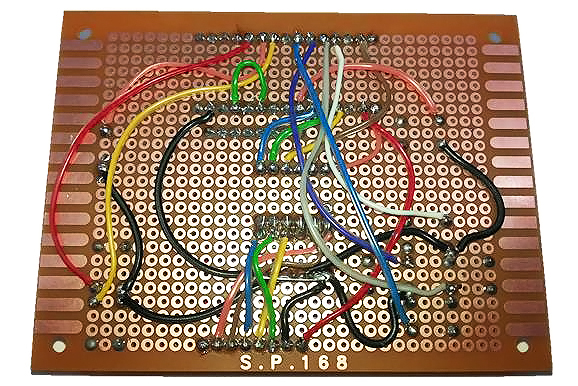 This completes the wiring of the Game Machine

To compile your own sketches for the Arduino Game Machine, you can use the Gamebuino libraries. This can be installed by the Library Manager in Arduino by clicking Sketch > Include Library > Manage Libraries and searching for gamebuino.

If this doesn't work, the library can also be downloaded from here: https://github.com/Rodot/Gamebuino. The library includes a few examples, but not any games.

After this, it should simply be a case of selecting the Nano board and correct COM port and pressing upload. You should get a chime sound as well as the above left graphic when the sketch is correctly uploaded.

If the sketch doesn't compile, check that the library is installed correctly. If you get missing picture or sound, check the wiring to that component.

Pressing the A button (bottom right) should start the game, while pressing B (above A) will change the volume. C (top left) will cause the Arduino Game Machine to restart from the main menu (more about what the SD function is later).

After pressing A, follow the instructions on the screen, and use the directional buttons to place the X when it is the Player turn. Check that all the buttons work in the correct direction, and fix the wiring if necessary.

We've found a few pre-made games at http://www.yodasvideoarcade.com/gamebuino.php For example, to upload the Asterocks game, create an 'asterocks' folder in your Arduino folder, and copy the contents of the .zip file into this folder.

Then open the asterocks.ino sketch file, and choose 'Nano with ATMega 328', and the correct serial port, and click upload. If the sketch doesn't compile, then check that you have the Gamebuino library correctly installed.

There are also more games on the github page:

There are more games available from https://github.com/Rodot/Gamebuino-Games-Compilation but they are only in HEX format, so can't be compiled by Arduino. The HEX format is what the sketch gets converted to before it is uploaded to the Arduino. 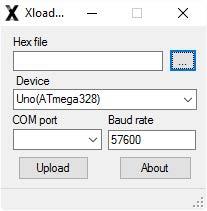 For Device, choose Uno(ATMega 328)- even though we're using an Nano, they have the same microcontroller, and this works fine. Set the Baud Rate to 57600 (this is what the Nano usually uses for upload), then select your HEX file and COM Port and press Upload. The upload should cause the lights on the Nano to flicker like a normal Arduino Upload, and then the game should start within a few seconds.

ght have looked at the official 'Gamebuino', and seen that it boasts a few more features than our version.

There is a backlight for the LED- this can be enabled by adding a 330 Ohm resistor between the D5 and LED pin on the LCD Screen- there are functions in the Gamebuino library to control a backlight on this pin. Otherwise, it can be permanently enabled by connecting the resistor between 5V on the Nano and the LED pin on the LCD Screen. Pin A7 can also be connected to a photo-resistor as a light sensor to allow automatic backlight adjustment- you can see the details of this in the schematics.

If you want portability, you could add a battery- even 3 x AA batteries (giving 4.5V) should be enough to run it happily. Alternatively, you could set up a Lithium Rechargeable battery to be charged from a XC4502 Lithium Battery Charge Module (just make sure the battery can handle the 1A charge current that the charger module can supply), and then use a XC4512 5V Boost module to run the Arduino Game Machine off the battery. You will probably need a switch like SS0852 Sub Miniature Slide Switch to turn it off to save the battery.

If you build more than one Arduino Game Machine, you can break out the I2C connections as a multiplayer link to allow multiplayer games.

The most ambitious feature we've left till last- and that's the SD card slot. We've left it out not because it's hard to do, but because you have to reprogram the Nano's bootloader to allow it to be used. The official 'Gamebuino' allows HEX files to be stored on the card, and loaded by the bootloader by pressing the 'C' button on the initial menu. This actually overwrites the game on the device. To reprogram the bootloader, you need an ISP programmer such as XC4627 ISP Programmer with XC4613 ISP Adapter, and also manually create a board profile that uses this bootloader. You can find more information about this on the Gamebuino page and wiki.